It is Our legal, social and moral DUTY to EXPOSE CRIME, FRAUD & CORRUPTION plus Lying and Hypocrisy in Public Life, Including Judges & magistrates

../Corrupt Police& Magistrates Menu.php An example of a CASCADING Drop Down Menu.

CDDM_IntroMenu155.php CDDM_StartSubMenu154.php BEWARE CrimeStoppers: HONEST CITIZENS are conned to Aid POLICE & POLITICAL CORRUPTION... CDDM_IntroSubMenuSubSubMenu150.php The plain logic: Accurate information does assist corrupt police to be more corrupt, and to ensure less likelihood of detection The culture of corruption; in Australia and Internationally Who benefits from 'Crime Stoppers' Gravy Train? Who are the 'players The Crime Stoppers Gravy Train: The ' Conference' Detective Superintendent Brian Hay What 'benefit' do the 'Sponsors' expect? In the case of the criminal pedophile abduction of Daniel Morcombe CDDM_EndSubMenuSubSubMenu.php CDDM_EndMenu.php

../Corrupt Police& Magistrates Menu.php An example of a CASCADING Drop Down Menu.

CDDM_IntroMenu155.php CDDM_StartSubMenu154.php BEWARE CrimeStoppers: HONEST CITIZENS are conned to Aid POLICE & POLITICAL CORRUPTION... CDDM_IntroSubMenuSubSubMenu150.php The plain logic: Accurate information does assist corrupt police to be more corrupt, and to ensure less likelihood of detection The culture of corruption; in Australia and Internationally Who benefits from 'Crime Stoppers' Gravy Train? Who are the 'players The Crime Stoppers Gravy Train: The ' Conference' Detective Superintendent Brian Hay What 'benefit' do the 'Sponsors' expect? In the case of the criminal pedophile abduction of Daniel Morcombe CDDM_EndSubMenuSubSubMenu.php CDDM_EndMenu.php

Where have those 'Smack the Pony' Parker fingers [3 sets in the photo] been?
This is a photo of the real low-life Lisa Parker.  She is a worthless no-body that is up herself.

I previously had here, another photo of another Lisa who is employed by translink, thinking that that Lisa was the lowlife parasite Lisa Parker.

That photo is now below in this panel.

I have now seen the LinkedIn page ostensibly for this Lisa Parker.


We had devoted, until now, two pages to this fuckwit parasite [the real FUDS Lisa Parker]; Second page, and first page.  Now that I have discovered her true photo, there is an even later page.

It will be worth investigating at some time in the future, how she came to be promoted to her present position - she has quite a number of subordinates -  so she thinks she is hot-scat - when she is such a dumb parasite.

Check out the SECRET telecommuications apparatus [two-way or mobile phone], on the left side of the neck of the other Lisa who tried to tell the Clarks Logan City Bus Service driver to not carry me with my assistance dogs in February, 2013, and having her collar up high to seem to conceal it. [This is in February and so not cool weather.]  I see her on videos trying to be "real cool" leaning her head down and talking into it; HANDS FREE.   This FUDS FITH fuckwit is worthy of ridicule.

I am disabled and have two wee assistance dogs.  I am entitled to be accompanied by my assistance dogs when travelling on public transport.  This ignorant FUDS bitch decided the better part of a seven years ago that I was required to have a "Translink Assistance Animal Pass" for my assistance dogs or they would tell their drivers to refuse my travel.  Of course that is illegal.   The Commonwealth of Australia's Disability Discrimination Act 1992(Cth)[DDA] gives me all the Rights I need.  These are Human Rights to a disabled person.

Translink parasites say it is their "policy".  Policy does not even have the influence of state law and by Sec 109 of the Australian Constitution, any state law inconsistent with a federal law is invalidated to the extent of the inconsistency. 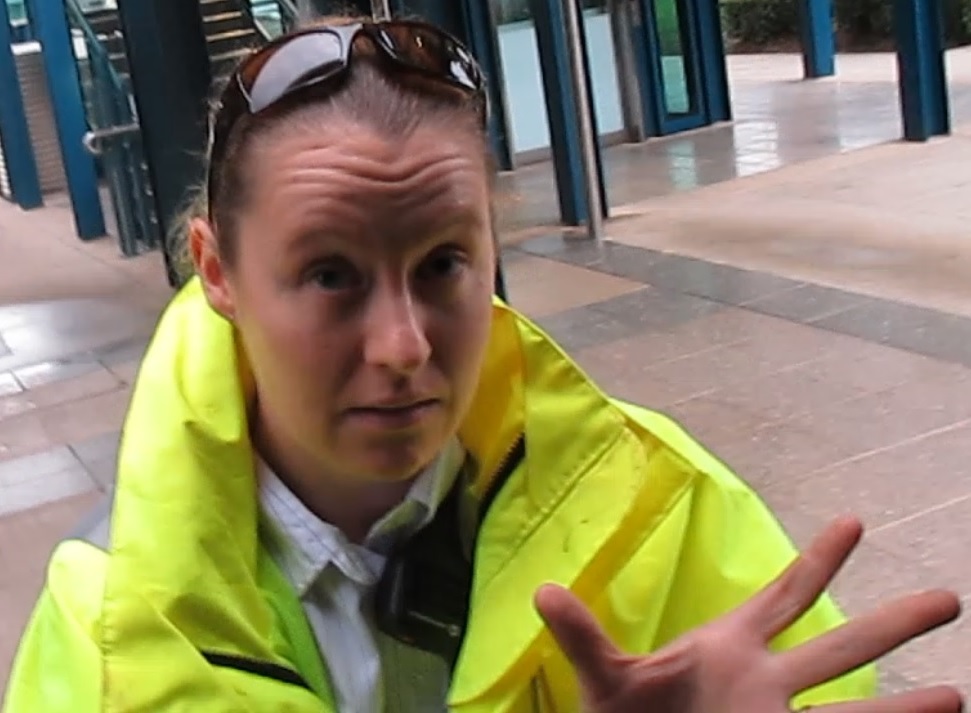 She is corrupt and so is translink.  This photo was taken on the 15th February, 2013 at Eight Mile Plains Bus Station.   They have CCTV to know when I am at a bus station.   Clarks Logan  City Bus Service buses will carry me without the Translink pass.  [That is the Law.]  On this occasion, she turned up knowing who I was, and tried to tell the Clarks' bus driver to not carry me.   The driver had been given a Company Directive that I should be carried while accompanied by my assistance dogs, and she knew that because the Transport Department had given translink staff the direction that Clarks had so advised, and how they were to act.

I had not seen her previously, and she did not introduce herself, so thought I would not know who she is; silly slut yet again.

Of course, when the driver ignored her and took me and The Boys [my assistance dogs] to the city, she was livid.   Eighteen days later, when I was legally on a Clarks bus, I was assaulted and caused GBH/permanent injury by three translink thugs since telling a whole pack of lies.  'Smack the Pony' Parker also lied that I did not have a ticket.   That bitch is so dumb that she should have realized that it is easy to prove I have a ticket when I do have a ticket.  There will be CCTV of my being issued with a ticket at 10:32am 5th March, 2013.

This assault was reported to the police, but the police, now including an Inspector, have become co-conspirators.  Of course, there is so much evidence of police corruption being protected by police, judges and magistrates and the Crime and Misconduct Commission.


So, FU dumb bitch.  This has a long way to go. I have seen a translink memo/email where these parasites in translink have seen my pages about this "smack the pony" slut, so decided they had to protect her.   There has been since, a criminal conspiracy within translink involving the Transport Minister and his staff.

Themes of  Websites
for the HAIG   REPORT: Group of Websites:
[We expect, in time, to have all of the thousands of pages on the HAIG   REPORT: group of websites accessible from this Menu of THEMES. Eventually, there will be 20 themes, each with an average of 15 to 20 websites/domains/directories, with each website/domain having an average of 20 pages. This would equate to 20 x (15 to 20) x 20 = 6,000 to 8,000 pages. This menu of Themes will be included near the bottom of each page, in time. With one line of code, strategically placed, this Menu of Themes is now on thousands of pages. We are continually and progressively adding pages to this Menu of Themes of website Menus.]

Menu: HaigReport'sThemes or Categories of the the Topics of the HaigReport Group of Websites:
© COPYRIGHT: Russell Gordon Haig Mathews 2002 - 2020


The LATEST ADDITIONS are added to the top:


See  All 67 Domain Names in the HaigReport Group


Now here are the THEMES &: 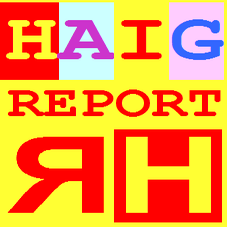 This page is part of the Internet presence of

SEE WHAT I PLAN TO DO ABOUT IT!