Attitude of the High Court


The Queensland Court of Appeal dismissed my appeal when I appealed the decision of the Supreme Court of Queensland [SCQ] to dismiss my application without hearing it.  Under our Australian constitution and later legislation, I have right to seek leave of the High Court to hear my appeal of the decision of the Court of Appeal.   I lodged such an application to seek leave of the High Court to appeal the decision of the Court of Appeal division of the SCQ.   Importantly, my grounds were basically, that the SCQ was corrupt.  Of course, if a court is corrupt, then all decisions of that court would have to be worthless.   Under our Constitution, the High Court of Australia [HCA], as the superior court of the supreme courts of all the states and territories of Australia, has responsibility to ensure that all of those courts are operating  properly.
So, if anyone raised the spectre of the SCQ being corrupt, I believe it is poor form and in fact highly improper for the HCA to try to silence such a stance, but that is precisely what they have done.  They have tried to place barriers in the path.  Does that give you greater or lesser confidence in the High Court of Australia?
Firstly, see what the Deputy Registrar of the HCA had to say. 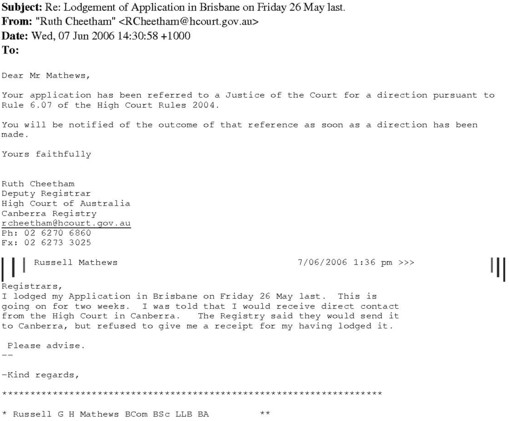 Well that is clearly what she wants.  Did you note her email address?  It is given again at the head of this page, in case anyone wishes to write to her expressing a view once they have read this whole page, and the pages hyperlinked to it.
She says, in her email dated 7 June, 2006, "has been referred"; past tense.  It would have been in Canberra on 29 May, 2006.  The date of this email is already 9 days after arrival in Canberra, of my application. 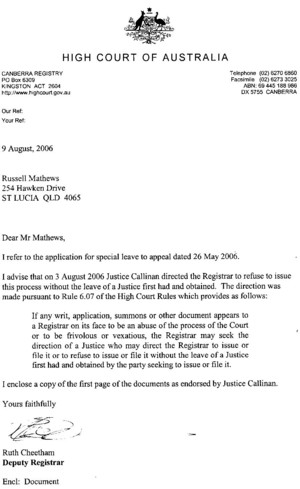 Callinan J made this decision of 3 August, 2006.   My application arrived in Canberra on 29 May, 2006.  That was over NINE WEEKS to make that decision.  It was ONLY ONE PAGE as can be seen below.  Ruth Cheetham said on the 7 June that it had already been given [referred] to "a Justice of the High Court".  It took over EIGHT WEEKS from that date.   So, what was happening.  There are SEVEN JUDGES of the HCA.  How many other judges of the other SIX JUDGES of the HCA had refused to make the order that Cheetham wanted?  If all other six judges had had it referred  to them but refused, that would have been an average of more than ten days per judge.   That would be quite realistic.  So, how many other judges refused to make the order desired by Cheetham.

Maybe we should consider a little more about Callinan J. 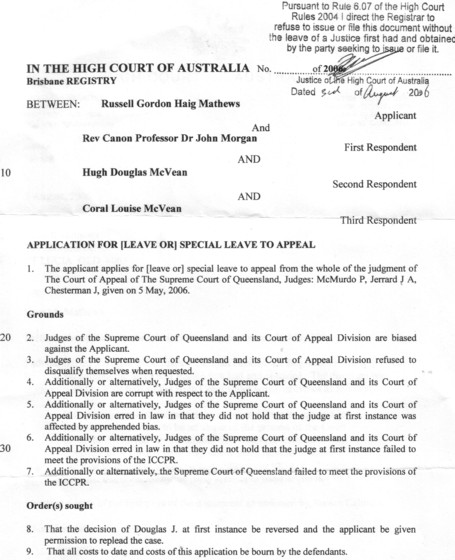 So Callinan J has found that, on the face of it, that my seeking leave to appeal is an abuse of the process of the Court or is frivolous or is vexatious.   I suggest that Callinan J. is taking a very big risk that the SCQ is actually corrupt, but that may never be discovered.  If this is a suggestion that the HCA is itself corrupt, there will be no point in my wasting my time in overcoming this extra hurdle placed in the my way.

We know the saying:  "There is no-one so blind as he who will not see [or open their eyes, even]."