NEW, from AustLawPublish ,
Alumni Journals for the Australian Universities.
Check if your University is there.

Evidence that no-one can trust The University of Queensland. 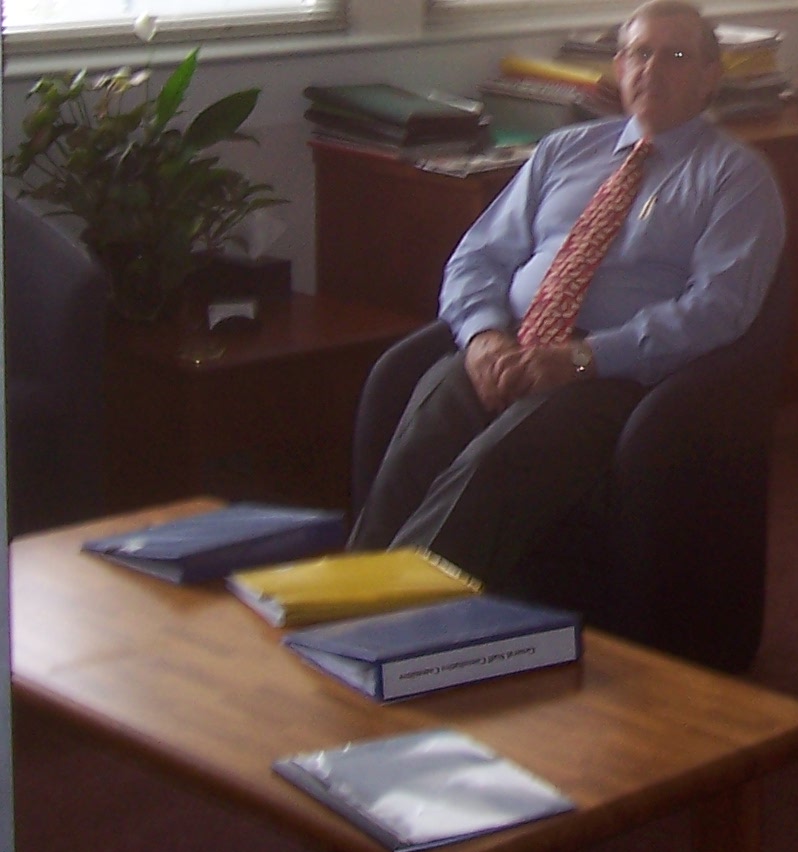 Douglas Porter,
[now ex]-Registrar of The University of Queensland,
WORKING?
Checkout his HOME

This is documentary evidence [below]; AN ADMISSION in writing, by the Registrar and Secretary of The University of Queensland [UQ], Mr Douglas Porter, that his word counts for nothing.   If the word and assurance of the top employee of the UQ counts for nothing, then no-one can trust the word of any employee of UQ.  If an employee is challenged, all that employee has to do is to quote this admission by Douglas Porter.  In fact, this is the CULTURE OF THE UNIVERSITY OF QUEENSLAND:    International Students should be very wary of dealing with UQ.  My experience, as DOCUMENTED HERE, suggests that if you take the word of Douglas Porter or anyone else at UQ, you can still be cheated by UQ.   It matters not even if you obtain the CONTRACT in writing as Porter was quite prepared to give me confirmation of his promise in writing as below.   [This was, and STILL IS, a contract, as I gave consideration for this promise from UQ.]   This makes the actions of UQ ILLEGAL, as a BREACH OF CONTRACT.   This was not a contract involving land so the Statute of Frauds does not apply and the contract does not have to be in writing.  It cannot be voided by UQ, as they have tried to do.  As you will see from Porter's letter to me, HE HAS IMPLICATED THE VICE-CHANCELLOR JOHN HAY in this DISHONEST, UNTRUSTWORTHY and ILLEGAL REPUDIATION OF CONTRACT.

What is more, UQ, Porter and THE VICE-CHANCELLOR of UQ, owed DOUBLY, A FIDUCIARY DUTY.  Hay has been central in the decision to not only BULLY A DISABLED STUDENT,  but also breach, the PROMISE, the CONTRACTUAL DUTY and FIDUCIARY DUTY OWED TO THAT STUDENT.  The FIDUCIARY DUTY AROSE,  not only because the student was and is disabled, but also, because UQ, by the actions of its Registrar, Douglas Porter, agreed to obtain a report for itself and also as trustee for the student.  In that situation, a fiduciary duty arose regardless of the student being disabled.  Additionally, the student had supplied CONSIDERATION for the promise to make the report available for consideration of both UQ and the disabled student.
It says volumes that the Registrar and Secretary, AND THE VICE-CHANCELLOR of UQ,  were so blasé and indifferent about honesty and trust that Porter was prepared to give me in WRITING, the PROOF that he and the VICE-CHANCELLOR were prepared to publish that the word of the Registrar and hence the University is worth naught.
This failure on the part of UQ did not occur in just a trifling matter.   This was, and still is, a matter of serious discrimination against the disabled by UQ and the Registrar Douglas Porter.  I will explain the matter in detail below.   Click here to see the full letter as a .pdf file. 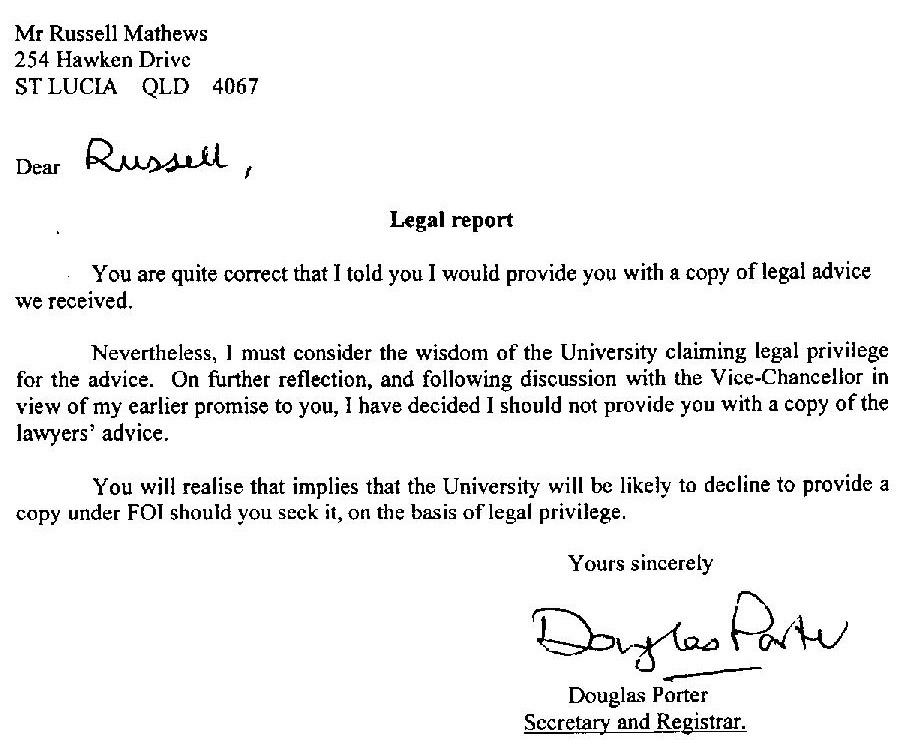 Unfortunately,  I am disabled.   I have two assistance dogs and I am entitled by the law to take them with me where ever I go, subject only to restrictions as provided for in the Disability Discrimination Act 1992  [DDA].


I was a student at UQ and was consistently discriminated against and harassed by UQ, Porter and other staff at UQ.   Porter had written to me.  This indicated that he was receiving legal advice from Internal staff.  As one trained in law and with a special interest in the DDA, I was aware that this internal advice was in error.   I had substantial rights, and UQ was denying me them.   Porter was receiving the incorrect advice and harassing me as a result.   He stated that he did not wish to be continually confronting me and desired that I not continually assert my rights.  He required that I practice a "less confrontational regime".   I suggested that if he wished me to act differently, it may be a good idea to obtain an external legal opinion to be the basis of our further discussions, as the present advice he was receiving was in great error.   I was particular to ascertain that I would receive a copy of the external legal advice as I would need to see that advice to further our discussions.  Porter agreed.  In accord with Porter's request, I agreed to not press matters until that opinion was received.  Before the advice was received, UQ decided to impound my dogs, right in front of me. When the advice was received, and, "following discussion with the Vice-Chancellor" [that is John Hay, AC] Porter decided to RENEG ON HIS AGREEMENT AND CONTRACT and not release it to me, contrary to what he had AGREED AND CONTRACTED with me to do, on behalf of UQ.   Clearly, just as I expected, the advice proved that I was correct as per the pages on this site.   UQ and Porter then waived Legal Professional Privilege [lpp]  in a number of ways, on a number of occasions, by stating that he, Porter knew what the law was in this regard because, "as you know, I have received an external legal advice on the matter", and on another occasion when Porter set out to me what he required and that that was in line with the external legal advice from that particular firm of lawyers.
[go to HAIG REPORT home frames]