Yes, this is UPDATE01 [yes, just the first: there will be many more  until Gaylene Vivian is in JAIL, and she WILL BE.  ||  SEE:  the precursor page].

It has come to our attention that this parasite Gaylene Vivian has been concerned by our page about her.  She has had her "REPRESENTATIVES" repeatedly checking our page and making "representations " to the BCC to have them take some action to "protect" her from the publication of the truth: that she is a dumb parasite who actively attacked and illegally discriminated against a disabled person.  Well, Gaylene Vivian, you dumb bludger on our society, YOU DESPICABLE PARASITE OF OUR TIME, the BCC will not take any legal action against me, because of the many crimes that you and your fellow parasites in the BCC have committed against me, together with the elected councillors who have ignored their responsibilities of rectifying the wrongs against me.  The cover up has gone to such lengths and heights so far, that so many are implicated, showing just how corrupt is the Queensland "injustice" system.  If a Primary media outlet wants a SCOOP, this CONSPIRACY TO CHEAT AND DEFRAUD could be broken any day now.  This will be broken from outside Queensland and probably form outside Australia. However, this is not essential.  The hits on our websites are growing at better than exponentially. More and more people are visiting our sites and an ever increasing number are regular visitors. Thankfully we have extremely high Google rankings.

Gaylene Vivian just thought she could be a conspirator in the Brisbane City Council [BCC] attacking a disabled person in the BCC region because others in the BCC were also attacking him.  She has committed many wrongs, sins and CRIMES.  She thought she could do it with immunity as she was physicaly remote from the disabled guy.  Well, Gaylene Vivian, you lowlife scum of society, the "pigeons are coming home to roost".

As occurs so often with corruption, it is the COVER-UP that really becomes the MAJOR CRIME.  Because you have been involved in the "lead up" wrongs, you are an accessory to the subsequent Major Crimes of the stealing, breaking and entering and illegal entry to my home and home building.  The other crimes to which you are an accessory INCLUDE FALSE IMPRISONMENT.

You are FULLY implicated, and I have the evidence.  It will be all the worse for you the longer it takes for you to be brought to account; and I assure you, you will be.  You could have made a full admission of your involvement long ago. That you haven't will count againt you. You could still do that NOW.

Let's count some of the ways you are implicated. The first installment of evidence was the email communication.

Your name is on the first email showing that you received it.  Garth Donnelly sent it to only four people.   Clearly this is the inner circle of the conspiracy to defraud me and cheat me.  The other aspect to this first email, is that YOU POSSESSED A COPY OF IT ON YOUR COMPUTER.  All five of you illegally decided to not provide it for release to me by FOI.

Then we have your second email that you actually wrote, to the "inner circle" conspiring to cheat and defraud me, regarding the BCC conspiracy to defraud me. This email of yours shows the group you knew to be involved in this conspiracy.   Clearly, you thought you could do it because you are so powerful and I was so weak, being disabled, and you could do it from your powerful position in BCC City Hall. The other aspect to this second email, is that YOU POSSESSED A COPY OF IT ON YOUR COMPUTER.  All SIX of you illegally decided to not provide it for release to me by FOI.  Also involved in this second email, is YOUR ADMISSION THAT YOU LIED TO ME.  Just think.  If I had tried to say that this is what happened, you, or your lawyers, [expensive barristers, SC and QC's, for whom you pay] would be able to make it appear far less certain.   With this email, we have not only the circumstances, but also your ADMISSION that you LIED to me.

Those two emails show so much, it is not wonder that you and your co-conspirators did not wish it to become public.  Garth Donnelly "released" them, only because he had not option.

What a tangled web .... hey Gaylene Vivian, you EVIL SCUMBAG PARASITE.     If you are worried now, that worry will only increase into the future.


Well, Gaylene Vivian, you despicable flotsam of society, my persistence over more than seven years has enabled me to have this irrefutable evidence showing what a parasite you have been. We are now approaching a watershed.  I think you will be "drowned".

As I related to your co-conspirator, Garth Donnelly, quoted below, my persistance has persisted for many years.
"That would have been fine for you, until your little clandestine cache of secret emails about me was discovered by that ex-Metropolitan Police officer, after more action by me.  He permitted you to release them yourself, which you did with a fabricated excuse of their "discovery".  That would have been fine but for the Information Commissioner [IC[ wishing to investigate your "fabricated" story, due to pressure from me.

"The IC interviewed you and you lied to her with your fabricated story.   She committed that to an affidavit for you to sign.  By this time,  you were really pannicking.  You were so smart again to commit all this to writing in an email.  You knew how serious it was to sign a FALSE STATUTORY DECLARATION; to do so is PERJURY.  Yet, you did in fact SIGN IT. You have already committed that CRIME,  and you cannot undo it.  [You might be able to go "crown witness" and implicate some of your co-conspirators in the Brisbane City Council [BCC] and again in 2004, and of course Hugh McVean]. YOU KNOW YOU ARE FACING A JAIL TERM.  Your deceit has meant that your initial "helping" that con-man criminal Hugh McVean to cheat me has become your now committing a most serious crime against the very basis of our civilization and justice system, COMMITTING PERJURY.   The courts will have to make an example of you."

first email     and the second email


Is Gaylene Vivian another LIAR at BCC?
[go to HAIG REPORT home frames]
It is becoming apparent that the CULTURE  at Brisbane City Council [BCC] is one of LYING and CHEATING.   The name of Gaylene Vivian first appeared on the SHAMEFUL email sent by that PANICKING GARTH STEVEN DONNELLY viz: [she'll be really happy with our Garth.  Gaylene's emails were in Garth's little stach of emails about me which had not been released to me by FOI but should have been.  bUT CONSIDER: There were AT LEAST FOUR OTHERS IN THIS LITTLE EMAIL CIRCLE/LOOP, and all FIVE copies should have been produced to me be FOI.  NONE WAS. I think it would be a fair bet that when the FOI officer calls for emails, the BCC parasites just go through their emails and "delete" those they would prefer were not released. It is possible to interrogate the server for all "deleted" emails.  Given the history of this matter of the BCC cheating me, the SERVER SHOULD BE INTERROGATED FOR ALL "DELETED" EMAIL.]

Gaylene was in the Urban Transport department of BCC.  The BCC agreed to build a fence on the two street boundary of my home as the BCC had sited a bus stop right alongside my home.  The Queensland Police and The University of Queensland [UQ] BOTH,  have repudiated their responsibilities owed to the community.   The Bus Stop is used predominately by UQ students.   At night, they booze up at the bus stop before going out to nightclubs in town. [THE QUEENSLAND POLICE PERMIT IT TO CONTINUE.  Apparently, the only problem they found they had was my complaints so the POLICE ATTACKED ME. That is easy for them to do when I have my deformed features and look freak-ugly.]  Prior to the new 1.8 metre fence, I had a 60cm timber fence on which they would sit.  That was breaking the fence and often I found them skylarking on the broken fence because they could make it "spring", "Oh, <giggle>, <giggle>, <giggle>"  (??)  Additionally, I had, and still do have, beer bottles thrown and broken in my yard and other rubbish thrown over my fence.   My initail complaints to the local BCC elected councillor Judy Magub [I 'll tell you about her on this site soon.],  received a reply that she would have the BCC rubbish contractor empty the two small bins at the bus stop, once more each week, so rubbish would not "overflow".  would you be surprised to hear that that did nothing to reduce the problems I was facing.  I have watched as one moron walked past an empty bin from near the kerb across to my fence to throw the bottle ove my fence, as though it was the "cool thing to do".

Anyway, I digress, [that should not happen with .html], back to Gaylene.  In her email immdiately below, SHE ADMITS SHE  TOLD ME REPEATED LIES.
"I unfortunately took the call.  He wanted to speak to everyone's supervisor - David, Mark, Ken, Michael, etc etc.  OBVIOUSLY NO-ONE AVAILABLE." 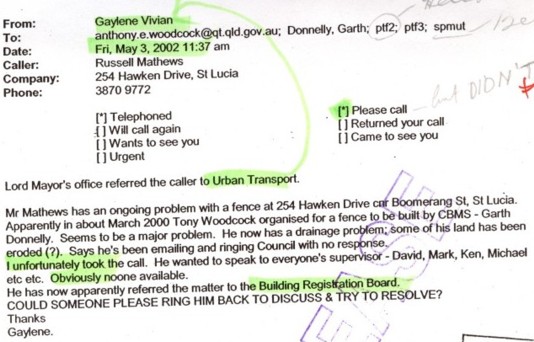 I ask, "Why so OBVIOUSLY?"  Did she mean: "Of course, I told him that no-one was available."  Maybe, it was a matter that they all knew that EVERYONE IN BCC  was absent at a SUPERVISORS' conference, then it would be OBVIOUS [to those who knew that] that no-one would be "available"..   Maybe she will be able to explain herself.   Let's assume that there were SIX people, maybe there were more.   Let's calculate some statistical probabilities.  [I am a mathematician with one of my majors in Stats.] Was it just a freak event that no-one was available?   What would be the probability that it was just chance alone, that "no-one was available"? If there were only six for whom I asked, and if we say the chances that, at any point in time, a person is not available [it was then about 11:37am], is say one in four [ie they are not available for one quarter of the time  - or is that working the public sector parasites too hard?], then the probability that all six were absent by chance alone is less than one chance in 4000.   All statistical tests of probability will hold that that is way  too low to have occurred by chance alone.  That means there is something else at play here.  So they were all absent for the same reason, [well not all independent events anyway], or it was a lie.  I will await her explanation with expectation.  She will have had plenty of time to devise an explanation.
[go to HAIG REPORT home frames]