Evidence that the Supreme Court of Queensland [SCQ] is unable or unwilling to keep its house in order.   Is the SCQ, and all its judges, CORRUPT?

Courts have mammoth power. My experience suggests your best chances at having this power exercised for your benefit in Queensland is to have a crooked lawyer.  What does that say for the Supreme Court of Queensland [SCQ]?]

This could have major International Ramifications for  Australia, as Australia is a signatory of the International Covernant on Civil and Political Rights [ICCPR].


Article 14  of  ICCPR
1. All persons shall be equal before the courts and tribunals. In the determination of any criminal charge
against him, or of his rights and obligations in a suit at law, everyone shall be entitled to a fair and public hearing by a competent, independent and impartial tribunal established by law.

Under our Federal Constitution, it is the HIGH COURT OF AUSTRALIA [HCA] who has responsibility to hear matters with respect to Australia's International Treaty obligations.

If SCQ will not keep its house in order, AUSTRALIA is in breach of its responsibilities under the ICCPR.   See what the High Court of Australia has to say.   Lawyers, [solicitors and barristers], are admitted to the Supreme Court of Queensland [SCQ] enabling them to practice law and to appear before that court.  Courts have what is called inherent jurisdiction [ij] to keep its own house in order; to ensure that the admitted lawyers maintain minimum set professional standards.  Law schools and courts claim that these Professional Standards are enforced by the court for the purpose of maintaining the community's confidence in the court, its admitted officers  and the legal profession.  This is called Professional Discipline.

The solicitors here who wrote the first two letters [below] are solicitors for my sister Coral and brother in law Hugh McVean.   [I have concealed their identity, solely to avoid giving them publicity, as, since, the whole legal system in Queensland, and so Australia may be  CORRUPT (I suspect that many reasonably informed bystanders would see this firm as "corrupt" too), CORRUPT SOLICITORS WOULD BE  FAVOURED BY THE COURTS AND HENCE CLIENTS  WHO WANT TO WIN.    This would not be satisfactory for a supposedly civilized country.]

VA & RGH Mathews are my parents and also the parents of Coral McVean, my sister.  Here these solicitors are also acting for my parents who are the parents of Coral McVean and in-laws of Hugh McVean.  Although my parents wanted certain things for me, Hugh McVean, also their client and my parents son in law, did not, so the solicitors ensured that Hugh was favoured over my parents.  This is actual fraud and the firm of solicitors have been a party to actual fraud.  The fraud appears on the face of these documents.  Although my parents wanted me appointed as an EPOA [Enduring Power of Attorney] , apparently, they reasoned, Hugh did not, so they conned me into sending back the documents to ensure I could not act, in effect not being an EPOA, contrary to my parents wishes.  Actual fraud, proven or even merely suspected, by the solicitors is not necessary for them  to have breached  professional standards.   The fraud just makes it so much worse that  they should be struck off the role of lawyers, permanently.  These solicitors also drafted the wills for both of my parents.   My father was dying at the time.  The will they drafted, did not reflect what they told him it would do.  With my being fully trained as a lawyer, I can advise how it should have been done.  Shortly before my father died, he confided in me that my mother favoured Coral.  My mother, who is blind, now lives with Coral  and is subject to Undue  Influence from Coral and Hugh.    Coral is also subject to undue influence from Hugh  as I shall explain later on this site.

Since the  SCQ admitted  them and still admits lawyers to practice, it is for the SCQ to keep its house in order.   This has been traditionally, what has been done, using as I said, their Inherent jurisdiction. 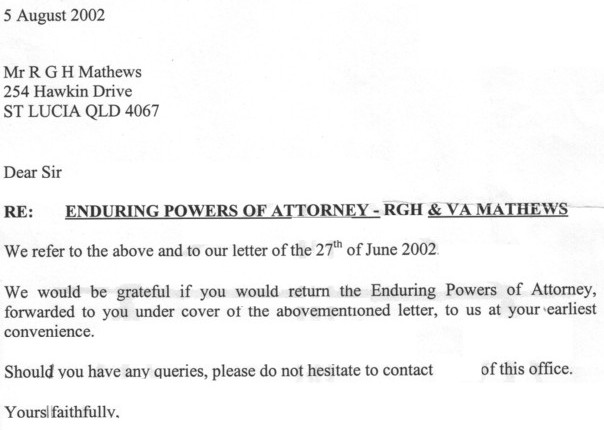 I reported this evidence to the Supreme Court of Queensland, including the name of the firm of solicitors..  These letters show a Conflict of Duty and Duty [codad] by those solicitors who were also Hugh's and Coral's solicitors.


The following is the response I received from the Registrar of the SCQ after I advised them of the details of this Unprofessional Conduct and/or Professional Misconduct.   The Registrar's letter implicates the Chief Justice.

What more is needed to show that the SCQ is either unable or unwilling to keep its house in order?   I suggest this is the "tip of the iceberg". Consider the way the that the SCQ's actions had the effect of protecting the corrupt staff of the Brisbane City Council [BCC] who trespassed in my home, including the building of my home and stole much property of mine, when in fact the SCQ had that irrefutable evidence before them by way of affidavit of the ACTUAL documents of the BCC itself.. The FORMER failure on the part of the SCQ is sufficient to show that the SCQ does not have its house in order.   It is figuratively a "house of cards".  I ask you, can any Queenslander [who may have no other avenue than the SCQ to grant them justice], or any other person who may choose to have the SCQ adjudicate on a claim, have any faith in the SCQ?  This would be a breach of Australia's undertaking in the ICCPR.  THIS SHOULD BE BROUGHT TO THE ATTENTION OF THE GENERAL ASSEMBLY OF THE UNITED NATIONS.   If this is a breach of ICCPR, and I believe it is, it makes a MOCKERY of the PUBLIC POSTERING on the world stage by John Howard and Alexander Downer, MP MINISTER for FOREIGN AFFAIRS and calls into question all that Australia is doing internationally in East Timor, IRAQ, Afghanistan and the Solomons.