OPEN LETTER [20061221] to Tim Mulherin, DPI & F, and Elizabeth Nosworthy AO re RSPCA requirement that my DUCKS MUST HAVE A SWIMMING POOL.

Minister for Primary Industries and Fisheries
The Honourable Tim Mulherin

I keep ducks at my home in the Brisbane Metropolitan area. I have “neighbours from hell” keen to bully me, benefiting at my expense and with the end game of then buying my home cheaply. They are liars and cheats.  They have complained repeatedly to the Brisbane City Council [BCC] and RSPCA about my ducks, but my ducks have always been perfectly kept, and could not be faulted. The RSPCA is happy, in turn, to bully me: no doubt for the no-bodies to gain some personal satisfaction of having some power over some other people.

I now ask the DPI & F, who shares responsibilities under the Animal Care and Protection Act 2001, [ACPA], with RSPCA, for a ruling on whether I am required to supply my ducks with a swimming pool and change the water in it daily, in addition to supplying them with sufficient drinking water.   I might add, that RSPCA personnel had been here prior to this.  On one occasion, the actual report she had was that my ducks had no swimming pool. She stated that such was unnecessary.  As for water, all that was needed was that they always had water to drink.   On a later occasion, on 27 September, 2005, [these neighbours from hell are really harassing me and the RSPCA are happy to perpetuate the bullying - those bullying complaints suggest to the RSPCA that I am "ripe" to be bullied in turn], two RSPCA personnel attended.  One was a "Senior Inspector" with the name tag of Brian Lewis. 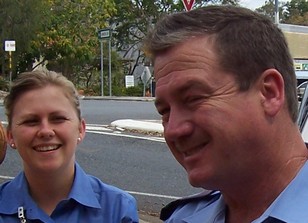 The other was a young female to drive him.  He approved the exact same water container arrangement, with out a swimming pool, that was viewed by Steley. [Maybe Lewis had other things on his mind.]  Has the law changed since then?  Did the DUCK UNION complain about WORKING CONDITIONS?

This matter is extremely serious and I demand your timely and undivided attention, as the RSPCA is attempting to set me up as being unco-operative, and threatening me with a fine of $22,500.00.

I think this will be of major interest to many Queenslanders. This website is VERY public. I challenge you to take the HAIGREPORT GOOGLE CHALLENGE.  My site has a high google ranking and it is improving daily.

I now direct my request to the Queensland Water Commission.

I am disabled. Additionally, I have a medical certificate that I should not carry water in buckets, for risk of injury to myself.  Please advise the method I should employ so that I will not be breached for disobeying water restrictions by using a hose daily to refill my ducks' swimming pool.

Please also advise if it is necessary for me to obtain and use, a SWIMMING POOL COVER!!!!

I am definite that I do not wish to be pleasing the RSPCA yet run FOWL  of another collection of public sector parasites.  Please acknowledge receipt of this OPEN LETTER and the ALERT EMAIL I am forwarding to you both, ALERTING you to the existence of this OPEN LETTER.