NEW, from AustLawPublish ,
Alumni Journals for the Australian Universities.
Check if your University is there.

The University of Queensland [UQ]:  Is it defrauding the Commonwealth of Australia??


[go to HAIG REPORT home frames]
There are TEN COLLEGES on the St Lucia Campus of UQ.   I have here details of the St Johns College [SJC].  It is reasonable to expect the the situation pertaining to SJC applies to the other nine on an equivalent basis for an equivalent amount.   The physical college, LAND and ALL BUILDINGS, is beneficially  OWNED by NO-ONE.   UQ provided the land by settling it on a trust with no beneficiary  but where UQ has a reversionary right, should the primary trusts fail, yet SJC pays UQ absolutely nothing.  It pays UQ NO RENT.  There are 48 subdivisions and two long road reserves in the site.  The buildings extend across the roads and subdivision boundaries.  Without the road reserves, the area of the subdivisions is 6.4 perches less that six and a half acres.   In this location, the land alone is worth $15 to $20 million.  With the buildings, the physical assets of SJC is worth $50 to $75 million.   The rent for  these premises would be in the order of $5 to $7.5 million. For the ten colleges this is an annual LOSS TO UQ of $50 to $75 million.

SJC website states that there are approximately 300 students at SJC. During the university holidays, SJC attempts to earn more revenue from hosting conferences.  To determine the annual revenue, one could extrapolate the weekly earnings during the university lecture period to the whole year.   Calculate an average of $200 each per week, for the 52 weeks of the academic year, for the 300 students for a gross annual revenue of $3.12 million.   Clearly, it is an uneconomic use of the assets of UQ.  It is an irrefutable tautology that if an asset is being used uneconomically, THERE IS A BETTER USE OF IT.  That use is the use by which it obtains its greatest value.  Even at this use, of the $3 million plus annual revenue, for SJC, it should be paying UQ in the order of  $1.5 per annum.  For the 10 colleges, this is $15 million.  This is the minimum extra revenue that UQ should have each year, and so not requiring from the Commonwealth Government.   UQ is making an  "annual SECRET donation" to the  Anglican Church of $1.5 Million, as a HIDDEN SUBSIDY.  My concern is that it is SECRET and HIDDEN.  See below the DISHONESTY and PANIC of SJC and the Anglican Church as they try to claim that they own SJC.

Apropos St Johns College:  here is an aeriel photo of SJC.  The land and buildings of SJC is beneficially owned by no-one, but  the UQ has a reversionary right to be possessed of the land and buildings, should the primary trusts fail,.   The trustee is the Corporation of the Synod of the Diocese of Brisbane of the Anglican Church [synod]  .

This is part of the "constitution" of St Johns College [SJC] submitted by the warden of  SJC, the Reverend Canon Professor Dr  [I am told he really loves his titles - so RCPD, eh?] John  Morgan to the Registrar of UQ dated 25 July, 2003.  A year later, the wording was different.  However, check out the Certificate of Title, below.

This is a doucment of SJC and of UQ as well.   It is wrong.  It discloses much incompetence. It was clearly drafted by someone associated with SJC or the Corporation of the Synod of the Diocese of Brisbane, and who is totaly ignorant and incompetent.. The Nomination of Trustees and Schedule of Trusts for this land  shows that the "Corporation" as trustee for no-one but subject to the conditions on the Schedule of Trusts.  Those conditions were set by UQ were the conditions upon which UQ was prepared to make the land available for a residential college for Students of UQ.   That would have to make it seem that UQ had more than a passing role in the formation of SJC on the St Lucia Campus [SLC] of UQ. In fact, UQ formed a CRUCIAL ROLE.  Yet, the Queensland Information Commissioner would have us believe that UQ had nothing to do with the formation of SJC on SLC of UQ.  I AM STILL ARGUING WITH THEM ON THAT. 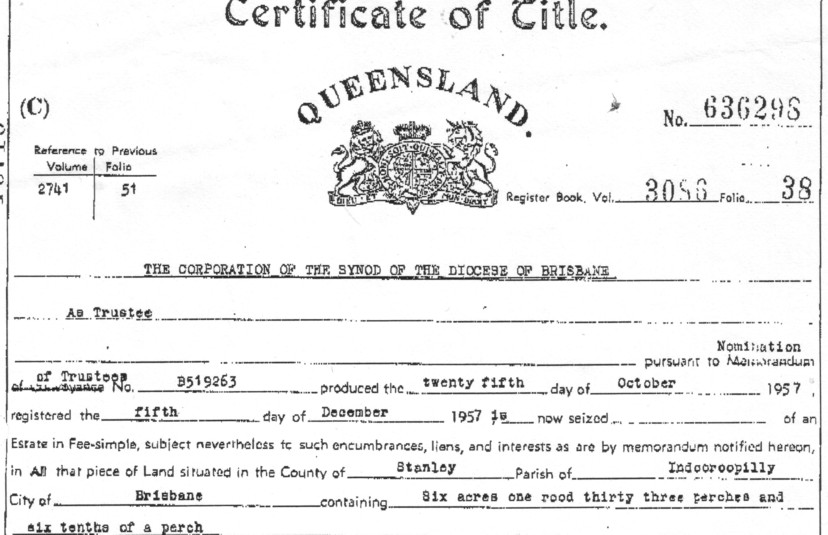 This is part of the title deed for the land on which the buildings now called SJC are built.   These documents mention two differently dated Nominations of Trustees.  I think it would be a reasonable guess that the only possible beneficiary of the trust is in fact UQ, and that is if and when the conditions per the Schedule of Trusts fail. One needs only consider the likely situation when synod became "seized" of this land.  Clearly, The Corporation of the Synod of the Diocese of Brisbane [the Synod - synod], is NOT seized of the freehold.


DISHONESTY and PANIC of SJC and the Anglican Church as they try to claim that they own SJC.
This is the email communique of RCPD John Morgan with me recently [13 September, 2006].

Hello Rev. Canon Prof. Dr Morgan,
I have just been turning my mind to the running of SJC.  It has a valuable block of land there: nearly six and a half acres.   That would be WORTH  a pretty penny in rent.  How much rent does SJC pay to UQ annually, for the use of the LAND and BUILDINGS?  What is the total floor area of the buildings?

I suspect that the rent paid will be SUBSTANTIALLY LESS THAN IT IS WORTH.  In the current  state of  government funding,  UQ will not be able to justify requiring more money from the Federal Government, if it is not  optimising it own assets.  LEGALLY, UQ IS THE BENEFICIAL OWNER OF THAT SIX AND  A HALF ACRES, and the BUILDINGS ON IT.

How much rent do you, SJC, pay to UQ at present?

Re: certificate of transfer.   As you can see above, the actual document is called a ":Certificate of TITLE". It does have the "synod" printed there on the top line in CAPITALS. I suspect Morgan did not read as far as even the next line of, "As Trustee".   Of course, the main document prepared by the conveyancer is the 'Transfer of Title" [too many "t's" I guess].   I wonder if "confusion" is a concern for the Anglican Diocese of Brisbane as RCPD Morgan is proud to be a member of the Diocese's Real Property Committee.  [Of course, RCPD Morgan has his PhD in Theology; ranking alongside Quantum Physics as one of the harder disciplines.  I am sure his PhD research added greatly to the world's knowledge.]  I wonder if RCPD Morgan understood the "constitution", [even that part of it above] attached to his letter in 2003 to the Registrar of UQ, [as exhibited above:  VII Property].  I think that is pretty clear: eh?

Now, let's see what Mr Peter Read, General Manager, of the Anglican Diocese of Brisbane has to say on the matter.   The following are comments from a letter, dated 7 September, 2006, to me from the Information Commissioner [IC] for Queensland, (Susan Barker), a Commission of the Queensland Beattie labor Government..

Let us now consider who has what to gain.   Since UQ at present, beneficially owns the land and buildings of  SJC, [there is little else tangible and of any real value], the "synod" has much to gain: the tangible land and buildings worth $50 to $75 million.  As for UQ, maybe it wants to "help" the Anglican Church and is being compromised by the Beattie labor government.  As for the Beattie labor government: by causing the Commonwealth government to spend an extra $50 million in Queensland by giving it to UQ, that is $50 million the Federal Government cannot spend or give elsewhere and still have the same budgetry affect.  SJC and the other colleges will still be spending that money in Queensland, whether they pay it as rent to UQ  or elsewhere in Queensland.   The only difference is if the Colleges spend the $50 million elsewhere, [because the Federal Government is led to believe that UQ does not own it], Queensland has an extra $50 million being spent in the economy initially, and with multiplifier affect, that is an increase of State GDP of about $200 to $250 million.  Did I hear someone say that Beattie would not do that to Howard and Costello?   You have heard of the Police "air wing"?

So, one has to wonder the reason that the Information Commissioner gets the law so wrong, as to hold that UQ has no proprietary rights over SJC, as in viz:

She is actually referring to that Certificate of Title above [Volume 3086 Folio 38] which has on the second line "As Trustee".
I have spent many years studying at The University of Queensland [UQ], having four Undergraduate degrees from UQ.  I already had one degree and much cross credit from UQ, before I realised how I was being cheated and since then, I have had to contend with repeated bullying and cheating of me by UQ.  I will produce that EVIDENCE [SUB-TITLE of this site - allusion to my LLB], later.  I am still in Brisbane, and now doing my PhD with two supervisors at opposite ends of Australia; Monash and Central Queensland.  It is progressing well and my supervisors are quite enthusiastic with my progress, with a grade of HD/7on some progressive submisssion.

When one is bullied and cheated, that person is always put down so that the bullies try to obtain to the HIGHER MORAL GROUND.  Hence, I do not expect anyone to just take my word.  I rely on DOCUMENTED THIRD PARTY EVIDENCE.   The  INTERNET  [WWW] is ideal for this.
[go to HAIG REPORT home]